During Christmas, Kolkata (Calcutta), a city of joy and festivities, illuminates with streamers of sparkling lights, silver stars, bells and Christmas trees. Joyous colours and chiming bells suddenly fill a cold winter night with the glowing spirit of Christmas. Owing to its British legacy, Kolkata has as much enthusiasm for Christmas as it does for Durga Puja or Diwali, the two most important Hindu festivals. Although a Christian festival, Christmas is truly a cosmopolitan celebration, as people of different castes and creeds join to rejoice together the birth of baby Jesus. 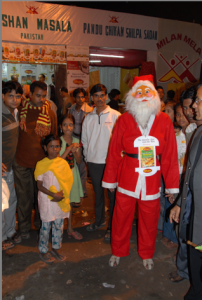 Park Street, the mythic boulevard of the city, and the New Market (Sir Stuart Saunders Hogg’s market established in 1903) however, are the major attractions centre where Bengali families, along with grandpas and grand mums, come to admire the glittering Christmas decorations and rejoice at the festive atmosphere. Young and old have the fun to shake hands with wandering Santas with long woolly beards who exchange good wishes in Bengali and light thousands of faces with joyous glee. Revellers cast a festive spell in bars, discotheques and night clubs stretching from Park Street to Theatre Road and in numerous 5-star hotels of the city. The old churches in Kolkata like St. Paul’s Church, St. John’s Church and Armenian Church are all decked up and the Christians and non-Christians alike take special delight to visit them and discover the cribs. 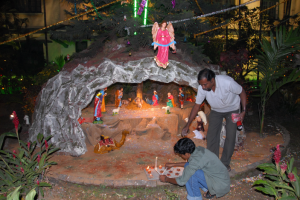 A crib in Kolkata.

An Heritage of the British Empire

It is interesting to recall that the city was the capital of the British Indian empire until 1911 and it witnessed a fast rise in the 1800s with the development of a European culture and mode de vie. On Christmas Eve, midnight mass is held in the city’s largest cathedral of St Paul and in Mother House on A.J.C. Bose Road, the global headquarters of the Missionaries of Charity (MoC) founded by Nobel peace prize winner Mother Teresa. There is a feeding programme at Shishu Bhavan, the orphanage, run by the MoC and for the Christians of Kolkata, which is the most appropriate place to celebrate the birth of Jesus Christ. Not just members of the city’s Anglo Indian community dress up in new clothes to attend the midnight mass, but people from other communities as well, come to pray in different churches and sing carols to celebrate the birth of the Saviour. This is followed with an exchange of greetings and gifts, feasting and celebrations while the bells of the churches chime merrily.

The Christian or the Anglo Indian localities of central Kolkata and areas like Bow Barracks, Sudder Street and Ripon Street are decorated with lights and Christmas trees and the distinct aroma of home-baked plum and walnut cakes and dry fruits soaked in rum waft through the narrow lanes. The non-Christians friends and neighbours join the party and celebrate Christmas with zeal and piety. It’s just enough to look towards the starry sky of Kolkata and imagine Santa passing across the moon on his sledge pulled by merry reindeers! Suddenly the little bells begin to jingle and spread the universal message of peace and happiness. A visitor at this moment of the year will find Kolkata no less than any European city illuminated during Christmas or New Year Eve. 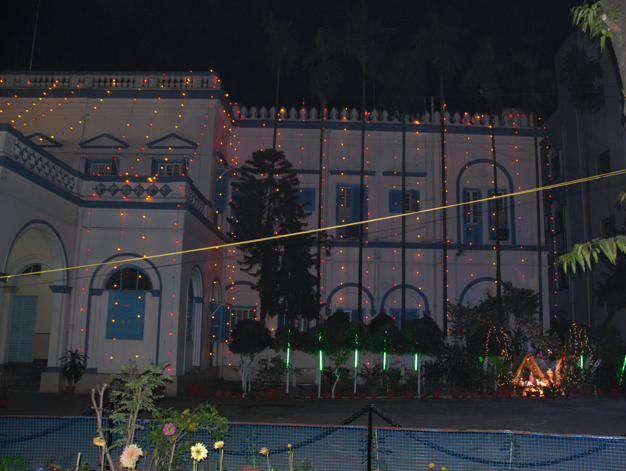 Christmas is known as ‘boro din’ in Kolkata as days start getting longer from the 25th of December. The Kolkatans traditionally throng the Alipore Zoological Park for picnic in the sprawling zoo grounds which offers an exceptional excitement to the families before they make their way to the famous marble clad Victoria Memorial and the sprawling lush green Maidan which buzzes with diverse activities and food hawkers. The planetarium and museums are also among the most popular places which the inhabitants simply adore to visit.

Christmas fairs are held in different localities with their numerous stalls of local handicrafts and eateries and concerts for public entertainment attract thousands of gleeful visitors. A month prior to Christmas Eve, all the shops begin to dazzle with spotlights to announce the commencement of Christmas sales. Special discounts and promotional gifts are offered by shopping malls and corporate companies. Kolkata becomes commercially very active and the city dwellers love to go on a shopping spree and throng market places day and night. 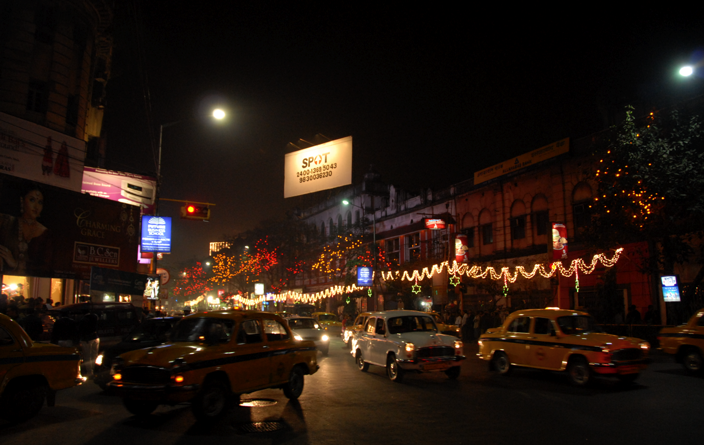 Cakes and Pastries to Celebrate Christmas

For Kolkatans, Christmas is synonymous with fruity Christmas cakes and puddings, cookies and creamy pastries that make Kolkata equally famous for its confectioneries. From The Nahoum’s, an old Jewish bakery in New Market to the Flury’s, a British-era tearoom on Park Street and Kathleen are some of the most renowned bakeries of the city where people make long queues and in no time all the delicacies are sold out. The chic night clubs, the exuberant shopping malls, the streets lined with bars, restaurants and neon lit shops of Kolkata reflect the magic of Christmas.

The followings accounts of Kolkatans describe how Christmas is celebrated:

“Christmas without home-made port wine is no Christmas. Our mothers and grandmothers used to make them and Kolkata was once famous for wines brewed by Anglo Indian women in the city, » said Gillian Rosemary Hart, a former legislator in West Bengal Assembly. Bow Barracks is known for its assortment of fruit wines. Almost every home, be it Anglo Indians, Christians from Goa or the resident Chinese and the Bengali population brew their own wine and bake their own fruit cakes for Christmas.

“The spirit of Christmas is timeless,” declares Ronald Thomas, a 70-year-old resident of Bow Barracks. « We prepare the ingredients for our Christmas cake and take them to the neighbourhood bakers. Many still make fruit wine at home. A special meal of pulao and chicken curry (duck’s out of the question; where’s the bird? Where’s the baker who’ll roast it?) is cooked in every home for lunch. Dinner, of course, is a shared experience as we all eat together, irrespective of religion or community. Untill a few decades ago almost every Christian home in the city baked its own Christmas cake with grandma’s patented recipe ».

“But increasingly people are shifting to ordering with professionals like us,” informs Denzil. His clientele includes Anglo-Indians, south Indian and Bengali Christians and a fairly large proportion of the Hindu Bengalis population, who, partly in keeping with the city’s Anglophile heritage and partly due to its love for festivity, must have its share of the Christmas revelry.

Time hasn’t changed much around Bow Barracks on Bow Street either. Close to the New Market stand the six dilapidated blocks of the Bow Barracks, a home to a hundred-odd Anglo-Indian families since World War I. The streams of light cascading down their striking red brick walls, a beautifully decorated Christmas tree in a spacious courtyard, uphold some of the oldest values that Christmas stands for. “Bow Feast begins on December 22nd and includes a concert, a Christmas party and dinner for all residents and friends and ends with a community dance on December 31st. We organise evenings for senior citizens and poor people and another for underprivileged children in keeping with the spirit of giving,” explains Bruce Eric Lindsay, a member of the Bow United Organisation. (1)

The 80-year-old Saldanha bakery, housed in a home that also functions as a bread and cake production unit, is flush with orders for seasonal favourites such as rich plum cake and walnut cake. Even in the midst of unforeseen price rise and attendant gloom, the telephone hardly stops trilling at the bakery. “We are now producing about 2,000 lbs of cake a day,” says 70-year-old Denzil Saldanha between answering umpteen phone calls and supervising the cake mixing all around him. He is the present owner of the production-cum-retail outfit complete with an enormous old-fashioned wood-fire oven and a living room where the cakes are packed into boxes and kept ready for delivery.

“It is customary to have family and guests over for a Christmas meal. Delicacies such as kulkuls are prepared at home, in addition to cakes and cookies, » says Melvyn Brown, the redoubtable publisher of a monthly newsletter called ‘The Anglo-Indian’.” (2)

The preparations for Christmas used to start about two weeks before when the house would be painted and the Christmas cakes used to get baked. The Christmas cake was quite a big deal and all the families would make their own but, as most people didn’t have an oven, they would go to have it baked by the local baker. One person was saying that his grandmother would go to sit there for the whole three hours during baking, keeping a careful eye on the baker and the oven.

Christmas day would start early with the mothers and grandmothers preparing the roast lunch, everyone hadmemories of roast duck, even though a couple did mention that their family used to have turkey, but the roast duck sounded like the favourite. The stuffing was made with the giblets from the bird, boiled mashed potatoes, peas, carrot and some herbs and the bird would be served with roaster potatoes, carrots, greens and lashings of roast gravy. Christmas pudding would follow and the rest of the day would be filled with singing Christmas carols and dancing.

« Thanks for the memories of Christmas in Calcutta… the city of my parents and my birth. I celebrated Christmas there only once as a five year old while visiting from Karachi. But strangely I still remember a lot of it especially a goat nibbling my grandmother’s Christmas cake ingredients which she had put in the sun to dry!!!! What a commotion that caused. I also remember trips to the New Market and the stuff dog and other toys I found under the tree at my grandfather’s house in Kidderpore. The baker was just across the house and I can still remember the aroma of the freshly baked Christmas cake. Unfortunately, all this was destroyed by partition… a very sad event. » (India British Raj)

Dec 18, 2010 10:20 PM
This is a great article. I wish the people in Australia know that you do not have to be a Christian to celebrate Jesus Christ’s Birth.
I remember the many Christmas & Festivals I enjoyed. I am an Anglo-Indian from Calcutta, now in Melbourne from 1969.
Do send this to the Herald Sun News.
Article sent to me from niece in Canada.
Once again thanks for this wonderful article.

One Reply to “Kolkata, the City of Joy, celebrates Christmas”